One of our Cayuga ducks has developed a bit of white coloring on her shoulders so it is now much easier to tell the two Cayugas apart. That means that I’m pretty sure that we just one very naughty Cayuga, not two, though both of them are the bored-est and therefore loudest of the ducks.

Our neighbor Peggy, aka “Treat Lady” to the ducks, named our flock when they were ducklings and apparently, the all-black Cayuga’s name is Spike. (We’re going to ignore the fact that our neighbor could tell them apart and I couldn’t.) The first time I caught “Spike” being adventurous was when I took this video:

I had watched the ducks taking sips from the water collected in the lid of the tote, but apparently Spike didn’t want to have to reach up from far. (Even if the ducks have a nice fresh pool of water to drink from, they insist on finding some gross bit of collected rainwater instead. Bonus points if it’s muddy. Extra bonus points if it’s from the ash pan of Marcus’s grill!)

And here is a recent picture Marcus took when he found her on top of the wicker table, aka “the duck cave:” 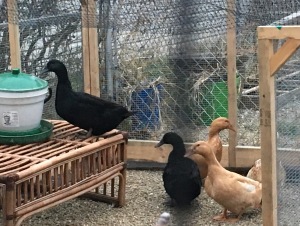 Right after the above picture was taken, I put a piece of plywood on top of it so that none of the ducks can get their feet stuck in the rungs during any future exploring. (I feel like the parent of a two-year old – I can’t watch the toddler every second but I can at least make the child have to work harder to electrocute itself by putting covers over all the outlets. Then at least it has to develop those “fine motor skills,” right?)

I’ve found duck poop on the table in the duck house before, so I was aware that at least one of the ducks 1. Knew it was a table and not just a low ceiling, and 2. Had figured out how to get up there. However, none of the ducks had been brazen enough to get caught, until last week:

And not five minutes later, I took this video: